UPDATE: the planned meeting on Tues 26 March at SOAS is cancelled.  London Mining Network say:  “Our South African visitors have not yet got their visas. It means they won’t be with us. We are cancelling the meeting on Tuesday evening at SOAS. Would you be able to inform people on your email list? Sorry about this.”

Lonmin is a UK multinational company, founded as Lonrho (London and Rhodesian Mining and Land Company) in 1909 during Cecil Rhodes’s brutal white supremacist occupation of Zimbabwe.  In 2012, there was a mass strike by miners at Lonmin’s platinum mine in Marikana, South Africa, demanding a living wage of Rand 12,500 a month. On 16 August 2012, 34 striking miners were shot dead by heavily-armed South African police, and around 70 others wounded and disabled.

Evidence shows that most of the strikers who were killed, were chased down after fleeing the scene.  (See video from Channel 4 News — warning, video is very upsetting.)
There has been no justice for this.  Some of the strikers were imprisoned after the massacre, and some are still in prison.

Many strikers were immigrant workers from neighbouring countries, trying to make a living.  The miners and their families live in an informal settlement around the mine.  The women have to deal with terrible living conditions, in shacks made of corrugated iron with no running water or electricity, subject to floods when it rains, as there is no drainage.  Yet the mine close by is supplied with electricity.  Miners have little health and safety, and families with children live in the shadow of the mine’s pollution, dust and devastation of the environment.  Lonmin puts itself forward as an environmental company, as the platinum produced from the mine is used in catalytic converters which reduce car pollution. 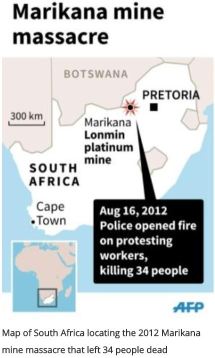 During the 2012 strike, the now-President of South Africa, Cyril Ramaphosa, was on the board of Lonmin.  In an email about how to handle the strike, he called the miners ‘dastardly criminals’ who should be met with ‘concomitant action.’  He was formerly an anti-apartheid activist who helped to establish the South African National Union of Mineworkers (NUM) in the 1980s.

According to current South African law, mining companies are only allowed to operate if they meet their obligations under the Social and Labour Plan.  They are supposed to provide affordable decent housing and facilities to the surrounding community.  Lonmin makes enormous profits, diverting $167m to tax havens in Bermuda and paying over $607m in dividends to its shareholders.  But it has not met its obligations to provide housing, while relentlessly polluting the communities’ land, water and air.   Lonmin said that the families are squatters — on their own land — as an excuse why building the housing could not go ahead.

(Thanks to the London Mining Network for some of this background info.)

Vedanta is another company with headquarters in London, and mines in India, South Africa, Zambia and other countries.  In February 2019, Cyril Ramaphosa was the special guest to open Vedanta’s zinc mine in South Africa.

Weeks before, in January 2019, Vedanta was in the UK Supreme Court in London.  This legal fight is about accountability of UK-based multinational companies for their subsidiary companies in other countries committing human rights abuses. (The Bhopal survivors have fought a similar case related to US company Union Carbide/Dow Chemical operations in Bhopal.) Vedanta has not accepted the UK courts’ decision that the case against them could be heard in the UK and took its appeal to the Supreme Court. The case is known as Vedanta and KCM vs Lungowe and others  (you can watch it online).

In the Chingola region of Zambia, the land and rivers near the copper mines have been contaminated. People living nearby get sick and die from the polluted water.  The women give birth to babies which are sick and disabled.  Farmer’s crops are damaged and the harvests don’t produce enough food. The farmers affected fear they would not get justice if their case was heard in the Zambian courts.  Watch this interview with Judith Kapumba, filmed by Foil Vedanta:

Vedanta has appealed the case all the way to the Supreme Court, fighting to avoid being held responsible for the polluting actions of KCM. The Supreme Court hearing was about whether Zambian small-scale farmers (women and men) can have their case heard in the UK for compensation for the effects of pollution and environmental damage caused by Konkola Copper Mines (KCM), a subsidiary of Vedanta. The farmers’ solicitor is Leigh Day  which has also brought Universal Credit human rights cases. The farmers and community are supported by Foil Vedanta, which organised a presence at court and publicity, as they did for all the stages of the case.  The Supreme Court has not made a ruling yet.

People affected demand an immediate stop to the pollution, clean-up and compensation.

The problem of severe pollution in Zambia dates back to colonial times when the British rulers granted indemnity to mining companies (they couldn’t be punished for doing wrong) for the effects of their pollution. These indemnities continued after independence in agreements between the International Monetary Fund and the Zambian government.

It is very encouraging that in India, the Dongria Kondh community were successful in their struggle against the opening of Vedanta’s Niyamgiri bauxite mine.  They have held off mining for many years.