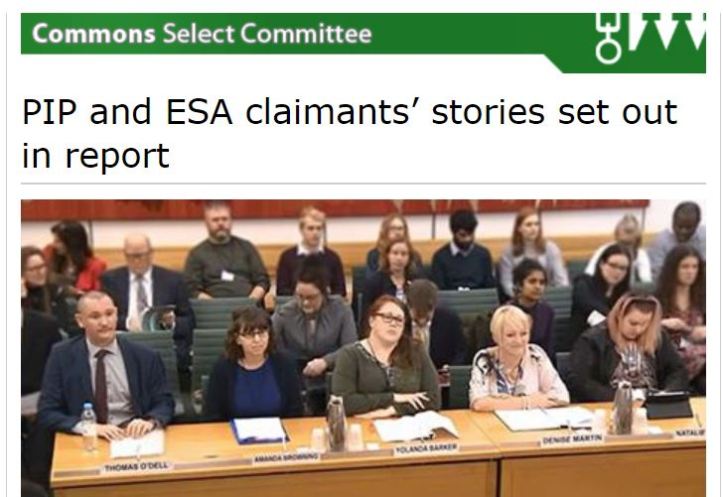 In February, the all-party Work and Pensions Committee of MPs issued two scathing reports on the PIP and ESA assessments done by Atos, Capita and Maximus — on claimant experiences, and recommendations on the system.  The MPs are awaiting the government’s response.  They got nearly 4,000 submissions, mainly from claimants, who continue to have a big impact.  The media keep referring to it — now publicising that most claimants who appeal, win their benefits – hooray!  The 60% success rate of appeals was one reason why the Work and Pensions Committee looked at assessments.

Although the MPs start by asserting that “Most claimants proceed through their PIP and ESA assessments without significant problems”, they expose how frightening the process is and how bad the problems are for a huge number of people and families.  The DWP statistics they quote, show that the disability benefits system has a massive deterrent effect.  Only 57% of ESA claimants complete a Work Capability Assessment (PIP and ESA assessments, page 7).  About a third of ESA claims are successful.  Of the 43% who don’t proceed, some thousands are sick and disabled people who died during the 12-week “assessment phase” without getting more than basic rate, others may have given up, or struggle with jobseeking or waged work.

The MPs concentrate on the assessment process, not the Work Capability Assessment or PIP points test.  But they say they aren’t finished.  They say:

For most claimants, PIP and ESA assessments go smoothly. But in a sizeable
minority of cases, things go very wrong indeed. For at least 290,000 claimants of PIP
and ESA—6% of all those assessed—the right decision on entitlement was not made
first time. Those cases, set alongside other problems throughout the application
and assessment process, fuel a lack of trust amongst claimants of both benefits. The
consequences—human and financial—can be enormous. Our recommendations aim to correct the worst of these problems and rebuild claimant trust. Properly implemented, they will bring real improvements for claimants going through the system now and in the near future. The question of whether a more fundamental overhaul of welfare support for disabled people is necessary remains open. We do not intend this to be the end of our work on PIP and ESA. (page 12)

Paper-based assessments feature as a routine part of the assessment process.  They are not exceptional or a privilege, as we are often told.  The head of Maximus told MPs that about a quarter of a million ESA assessments per year are done on paper evidence.  (Obviously this includes both successful and refused claims.)

A big gain during the inquiry, was the announcement in December 2017 of abolition of the government’s target to uphold 80% of benefit refusals during mandatory reconsideration – thanks to testimony by the PCS union DWP staff.  This will save thousands of people from destitution and misery, which they are put through after being wrongly turned down at mandatory reconsideration.

We’ve summarised some of the conclusions and recommendations:

Read the reports in full: