This is an URGENT CALL to support the People’s Convention called by Communities Actively Living Independent & Free (CALIF), an organization of people with disabilities.  The Convention is a protest that is demanding a California Budget that does not include life-threatening cuts proposed by the Governor, impacting the most vulnerable people across the state.

The lack of a California budget has already caused the closing down of vital services with many others barely holding on by a thread, impacting hundreds of thousands of people living in California including those in most desperate need.  As activist Lillibeth Navarro of CALIF puts it: “At what point do we ask for a bail-out like Fannie Mae and Freddie Mac!”

Politicians are playing political football with people’s lives and those paying the highest price for the lack of a budget are people with disabilities, older people, single moms, homecare workers, relative caregivers, communities of color, teachers, healthcare workers and more.  It has now been reported in the media that the Democrats and the Governor are working on a “compromise” that will allow passage of a budget for the state.  This  “compromise” must not include cuts to those most vulnerable.  The Governor and State elected officials supporting the Governor’s proposed cuts must not continue to put lives at risk.  We are often told there is no money for our basic needs but meanwhile we watch each day as our money goes up in smoke in wars and occupation!

What you can do –  please let us know:

e I will forward this call to my email list

e I will contact my State Assembly Representative and/or Senator
To find their names and contact information: go to www.assembly.ca.gov, 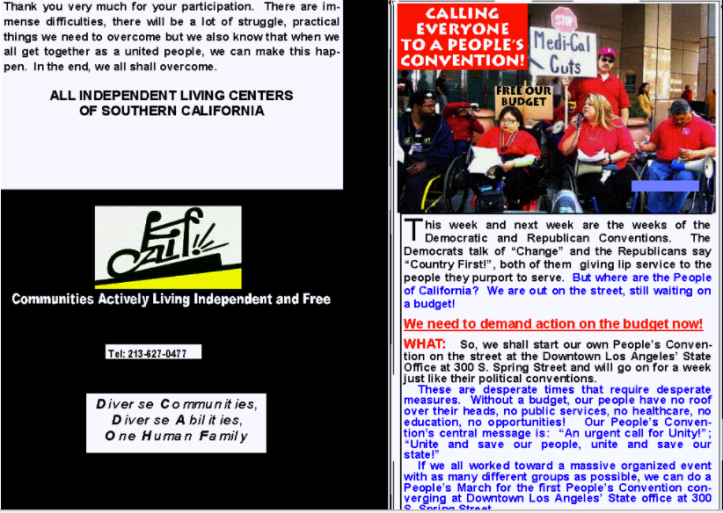