Dang Hong Nhut is from Ho Chi Minh City. She suffers from cancer & had multiple miscarriages due to exposure to Agent Orange.

Tran Thi Hoan, a 21 year old college student. She was born without legs due to her mother’s exposure to Agent Orange.

An all-women delegation of Agent Orange victims from Vietnam will travel across the country to advocate for compensation from the US government, Dow Chemical and Monsanto (the companies responsible for making the majority of Agent Orange) for both Vietnamese victims and US Veterans, as well as a commitment to clean up lands contaminated by Agent Orange.

Suggested donation of $5 at the door. – Light refreshments will be served. 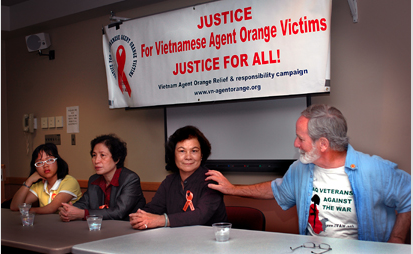 WHAT YOU CAN DO TO HELP